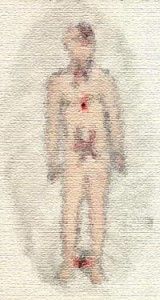 We are to build into our aura, which interpenetrates our other bodies, a replica of the Tree of Life. To the member accustomed in the Temple to seeing the Black Pillar on his left, and the White Pillar on his right, when facing East, we must remind you that you are now standing in the Tree.

You are as it were facing West, from the place of the Hegemon, with your back toward the East. This is why in making the Qabalistic Cross the right shoulder is touched in saying Geburah.

The making of the Qabalistic Cross is the ideal means of placing the Ego under the direct surveillance of the YECHIDAH, or the Divine Will in every human being. It is an excellent method for rendering the consciousness receptive to the dictates of the more responsible levels of being.

The Lesser Banishing Ritual of the Pentagram is a technique designed to eliminate from the psychic sphere those inferior elements which are undesirable, assisting the mind to a more responsive and open attitude to the dictates or intuitions of the Higher Self.

The third exercise is the building of the Middle Pillar and is an important routine method of spiritual development. In studying the Tree of Life, the Middle Pillar is seen as a series of five Sephiroth arranged in a single upright column. The exercise is the visualization of these circles or spheres of light in various significant parts of the physical body. They are to be realized as centers already existent in the human aura, the magnetic field, which surrounds and interpenetrates the material body of man.

Stand up, and raise yourself in imagination to your Kether – a brilliant sphere of light above your head. Imagine this light descending to Daath, the shadowy Sephira, which develops in the course of evolution, as we learn the domination of our mental and emotional propensities.

The position of Daath is at the nape of the neck, its diameter to be imagined as about four inches. It is the symbolic link between the Higher Self and the Ego or conscious Self. From Daath the light descends to Tiphareth, whose sphere extends from the diaphragm or solar plexus to the spine. Its center, the lowest point of the breast bone to which the ribs are attached. The diameter of Tiphareth is about six inches, and it glows like sunlight.