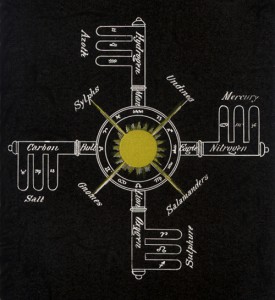 (Excerpts from an early lesson of the Society’s Astrology course.)

ASTROLOGY, (L. astrologia; Gr. astrologia; astron,-astral of, pertaining to, coming from, or like the stars, starry; and “logy” or “ology”, a suffix used in English derived from the Greek and noting a science). Therefore, the science of the stars. Astrology had its origin among the ancient Egyptians and Babylonians and from them spread directly and indirectly to other nations. Of the art of those ancients we have little knowledge. From them, however, astrology came to Greece about the 4th century BC, reaching Rome before the Christian Era. The astrology of India and China is largely a reflection of the Greek theories and speculations minus practical value and application. Astrology was developed by the Arabs in the 7th to 13th centuries and became a dominating influence in Europe in the 14th and 15th centuries.

The astrology of the Babylonians, such of it as we have recovered from the ancient texts, is of little value even though it dates back as far as 3000 BC. Among these peoples, five planets were recognized, – Jupiter, Venus, Saturn, Mercury and Mars, to give them the order in which they appear in the cuneiform tablets. Later, Mercury and Saturn change places in the texts. These five planets were correlated with the pantheon thus: Jupiter with Marduk, Venus with the goddess Ishtar, Saturn with Ninib, Mercury with Nebo and Mars with Nergal. The movements of the sun, moon and five planets were supposed to represent the movements of the five deities mentioned together with the moon-god Sin and the sun god Shamash.

The minutia of the Babylonians, however, was surprising. Their system involved not only the movements of the sun, moon and planets, but their relative positions to one another and all kinds of peculiarities noted in their movements. For instance, in the case of the moon, – the exact appearance of the new crescent, it’s position in the heavens, conditions at conjunctions and opposition, appearance of the horns, the halo often seen with the new moon, the ring around the full moon called the “stall,” etc.

While we find as early as the time of Khammurabi, (2000 BC) combinations of prominent groups of stars fantastically put together we find no evidence prior to 700 BC that more than a certain number of the constellations of our Zodiac formed a part of their system. The theory of the Ecliptic as representing the course of the sun through the year, divided among twelve constellations allowing 30 degrees to each division, is known to be of Babylonian origin but was not perfected until the fall of the empire in 539 BC.

From astrological texts prior to the 7th century, it would appear that the beginning of knowledge of sun and moon eclipses belonged to the earlier period but the accurate work was after 400 BC and the inaccuracy of the Babylonian calculations is shown by the fact that as late as the 6th century BC an error of nearly a month was made by Babylonian astronomers in the attempt to determine by calculation the beginning of one particular year.

Astrology received its greatest development among the Greeks and later Egyptians. The Greek astrologer and astronomer Hipparchus holds the credit for the discovery of the “Precession of the Equinoxes,” a signal advance in pure science. To the Greeks belongs the endeavor to trace the horoscope of the individual from the position of the planets and stars at the time of birth. This system was taken up by the Arab astrologers, embodied in the Kabalistic lore of the Jews and Christians and developed the substance and basis of the astrology in the Middle Ages.

Under Greek influences astrology was connected with all known sciences; botany, chemistry, zoology, mineralogy, anatomy and medicine. Colors, metals, stones, plants, drugs, animal life of the Ptolemaic system, Saturn is associated with gray, Jupiter with white, Mars with red, Venus with yellow, while Mercury held almost in highest esteem, was supposed to vary its color according to circumstances.

The sun was correlated with gold, the moon with silver, Jupiter with electrum, Saturn with lead, Venus with copper and Mercury with quicksilver.

Systems differed. In one, Mercury representing divine intelligence was supposed to be seated in the liver as the primeval seat of the soul. In other systems Jupiter and Venus held this important place in human anatomical correlation. Among the Babylonians the following was observed:

In another system we find the Zodiac developed as the prototype of the human body, thus; the head became the Sign of the Ram, the feet that of the Fishes. Between these two extremes the neck was assigned to the Bull, shoulders and arms to the Twins, breast to Cancer, flanks to Leo, bladder to Virgo, buttocks to the Balance, pubis to the Scorpion, thighs to Sagittarius, knees to Capricorn and the limbs to Aquarius. Diseases and disturbances of the bodily functions were believed to be due to influences of the planets in the constellations accredited to correlated organs.

Later, astrologers assigned the days of the week to the planets, beginning with Sunday, the day of the Sun, and ending with Saturday or Saturn’s Day. Monday became the Moon-day, Tuesday belonged to Tiw, god of war, corresponding with the Roman Mars, and Nergal of the Babylonians. Wednesday was Mercury’s day, the equivalent of the Germanic Woden. Thursday was Thor’s day, the equivalent of Jupiter, and Friday was relegated to Friga, goddess of love, Venus of the Romans, Ishtar of the Babylonians. Medically, Tuesday and Wednesday were assumed the proper days for blood letting because Tuesday was connected with Mars, god of war and blood, and Wednesday was the day of Mercury, planet of humours.

From the Middle Ages we inherit a long list of notable scientists and savants who studied and practiced astrology in its highest phases and the literature and bibliography of the Art is now voluminous.

Theoretically, astrology is the doctrine of the influence of the heavenly bodies “upon events natural or moral; especially the investigation of the aspects, configurations, etc., of the planets and their influences upon the life and destinies of men and individuals.” That such influences do potently exist and function has never been doubted by the advanced minds of past ages and only in the modern period where ecclesiastical influences have sought to impose all possible obstacles to the development of human knowledge except as regulated by autocratic hierarchies. And even so, little real knowledge is to be permitted the laity when it concerns the human soul and destiny, assumed to be the sole prerogatives of clerical exponents.

That the sun and moon exercise obvious and phenomenal influences upon tides, weather and vegetation is undeniable. That other heavenly bodies should be without comparative degrees of influence, peculiar to each in accordance with their relative positions toward the earth, is unthinkable. That human beings are influenced by phases of the moon (lunatics, moon-struck folk, etc.) in view of the physiological analogies with females is known by all. That diseases wax and wane in accord with lunar changes is household tradition and attested by all competent medical observers. All students of human nature agree that some individuals are Saturnine in temperament, others Mercurial, other Martial, etc. All who deal with earth conditions primarily, such as agriculturists, will maintain the indisputable fact that a man’s life, happiness and welfare, are intimately dependant upon the phenomena of the heavens and thus it is not without reason that astrology has been rightly termed the Divine Science, since it is in reality the science of human destiny and welfare. Comprehensive knowledge of law after studying the basic principles, one’s knowledge will depend entirely upon the amount of “reading” one does, just as the law student “reads” law.